Eggs and meths. A walk in the Clwydian Range

Yes, I know I spend far too many hours on the Clwydian Range but it’s just too tempting. A day off work,  35 minutes drive from home and so many routes to choose from.

Today, I paid my £2 to park up in the ‘lower Moel Famau’ car park on the Bwlch Pen Barras road. After my usual visit to make use of the facilities, I headed up towards the paths, taking a route to the right heading North East.

There are a few routes off this wide, multi use path. I continued on the main path, following it round  as it turned North. 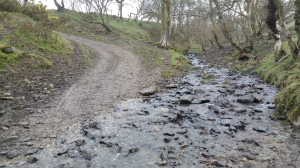 At a definite ‘crossroads’ I turned left, gradually climbing towards a track where  the route crosses a ford  (marked on the route map).  At the ford the track initially heads  North. Shortly after it turns to head North East, take a left to start the  ascent up the side of Ffrith mountain. 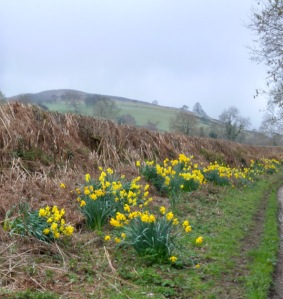 At the next junction I turned right, taking the suitably Welsh looking daffodil lined road towards a farm house selling eggs (marked on the map).
These eggs cost £1.20 (well cost me £1.50 as I didn’t have any change!) and come from a flock of free range  Black Rock hens.

At the next junction, I took a left towards Crug Farm and on to the road at Pentre. Here I went left along the road  which becames a track, passing two reservoirs.

Shortly after passing the second reservoir I used a narrow wooden plank to cross over a stream. As I was about half way round distance wise (the climbing was still to come!), it seemed a good place to stop for a coffee.

Filling up my water ‘pouch’ from the stream,  I used my Sawyer Water Filter

to pour clear water in to my Alpkit Titanium mug and fired up the meths burner.
Now, despite thinking of myself as an ‘outdoorsy’ type of person, I’d never tried boiling water out in the wild.  I had some success sitting in my back garden but this was my first real test and it went surprisingly well.
Perhaps it was the sense of achievement, perhaps it was the view, but this was one of my nicest cups of coffee for a long time!

The meths burner itself is simply a small metal bowl, in to which I pour some meths (I take  small travel bottle with enough meths for a few burns) .
Making sure it is sat on something that won’t catch alight, such as I stone, I use my lighter to fire it up. Initially not a lot happens. Place the metal wind guard around it and wait for the flames.  Once alight, stick the mug on and wait for it to boil
It can be a bit hit and miss, especially on cold, wet or windy days but Bare Bones provide a great guide and you get a great sense of achievement after making your first coffee!

Once I’d finished my cuppa, I left my intended route and followed a new path which was not marked on my OS map. The Tir Gofal is a bridleway/cycle route/footpath which heads South towards Pwl y Rhos. It soon became obvious that this was predominantly a cycle route, the trye marks had made the route very muddy. 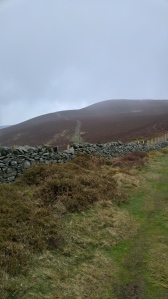 Despite not being on the map I had a good idea where I was heading, directly towards the Moel Famau path and as the weather was starting to close in, I was rather pleased that I could see the path I wanted but it soon became clear that path was on the wrong side of a fence!  The route then took a turn, almost back on itself, making  a horse shoe shape. I was walking  back to Moel Dywyll, following along side the path I actually wanted but in the wrong direction – oops!
This path eventually spat me out on to Offa’s Dyke. Not an ideal route  and I could have avoided it by continuing to the West after the coffee break, but it did add a few extra miles on which helped with the ViewRanger 500 mile challenge!

As I past the cairn the rain started to fall. One of those sudden downpours, as if someone had turned a tap on above my head.
Perhaps it was the gloomy skies, perhaps it was because I was already 8 miles in to the walk, but the path to  Jubilee tower at the peak of Moel Famau had never seemed so steep.

The view from the top was non existent so I headed straight down on the Offa’s Dyke path. It was quiet today, there were only a few other people on this route but I decided to leave it and join a quieter path so took the next left through the Clywd forest and back to the car park.

Yet again, a different route in a very familiar area…..and the eggs were delicious!